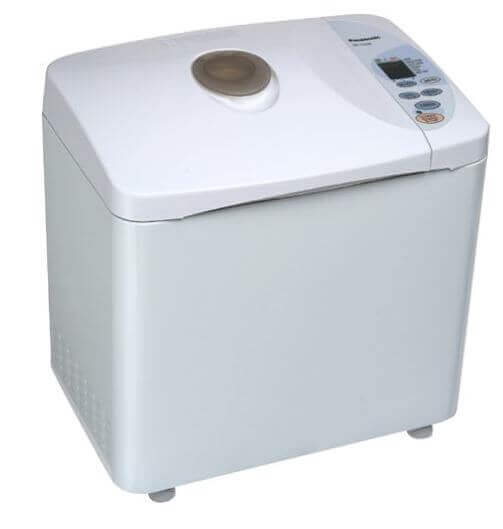 The Panasonic SD-YD250 bread maker bakes loaves in 3 sizes including 1.5, 2 and 2.5 pounds. It has 6 cooking cycles including Basic, Whole Wheat, Multi-Grain, French, Pizza, and Cake. It does not have a dedicated Gluten free cycle nor a jelly and jam cycle. It does have additional settings for dough and bake only, and 3 crust color settings. A curious setting is the Sandwich setting which bakes a softer crust, and it also will beep to tell you when it’s time to add fruit or nuts if you’re making that kind of bread. There’s also a 13 hour delay timer. The LCD control panel is easy to see and easy to use. 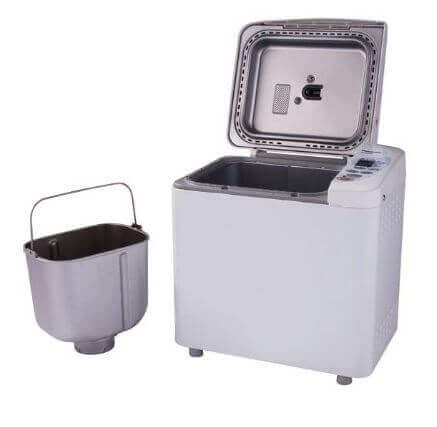 The bread pan is identified as a “non-stick” pan and there is no indication as to whether or not the coating is Teflon. Teflon is usually the coating used with most bread machines and the few machines that don’t have a Teflon coating typically communicate that very clearly. The pan creates a vertical loaf which is also the standard loaf configuration from most bread machines.

No Viewing Window in the lid

Unlike many other bread makers, this particular machine does not have a viewing window in its top lid. Panasonic identifies this as a benefit to allow for more even and consistent baking, but most bread machines have this feature and it does not appear to adversely affect the baking process. However, this model also features a locking lid which is somewhat unique and may in fact give this unit unique heat retention properties. On the other hand, it may get too hot as one owner reported:

“On the medium or dark setting–it REALLY burns the crust.” 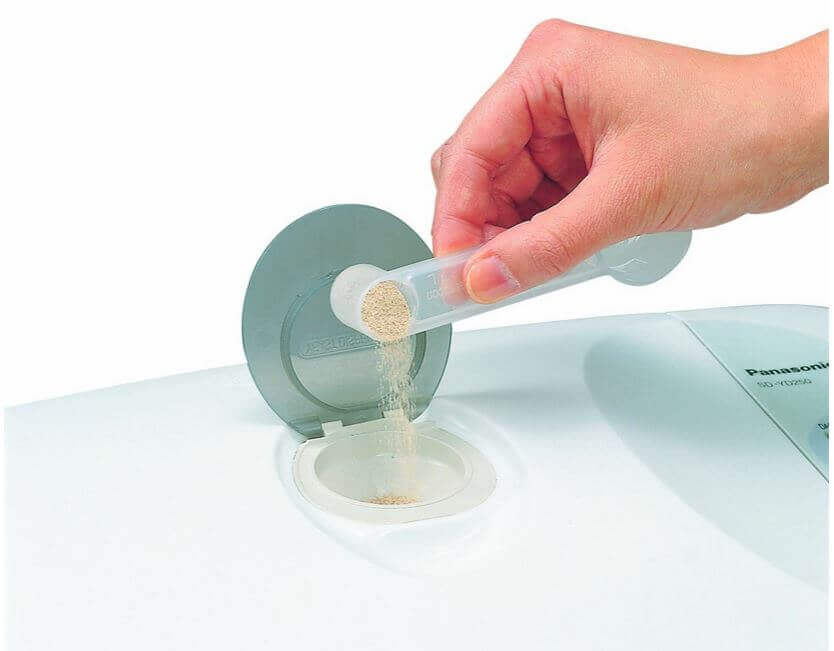 One of the unique things about this breadmaker is its automatic yeast dispenser. It’s designed to add yeast to a particular recipe at the optimal time. I’ve never owned a bread machine with this feature and have had consistent success simply adding the yeast on top of the flour in the bread pan. While the yeast dispenser seems to work well with few complaints some owners have stated that it does not work.

“Did not “drop” the yeast when it was needed as this model is supposed to do.”

If this happens you could always add the yeast to the top of the flour, but I could see where it would be a bit frustrating to pay for a feature that doesn’t work. There were minimal complaints about this but like any added feature like fruit and nut dispensers, there’s always the possibility that a complex part will fail.

Many of the reviews were very positive about the bread quality but there were numerous comments about the noise level of the machine and the fact that it would “walk” or move around on the counter top during the knead cycle. This may be due to the relative lightness of the machine (15 pounds) plus the added resistance of the dough in the larger 2.5 pound loaf size during kneading.

“I seriously think this thing is going to launch off the counter one day.”

“Great results but much louder than expected.”

“The machine was loud, and last month it took a dive off the counter.”

“It rocks and makes a lot of noise but makes good bread.”

It’s a fact that many bread machines make a certain amount of noise during the knead cycle, but the movement of the machine across a counter top could be a cause for concern. Here again, there were very few comments about this “rocking,” but there was enough of a pattern in the comments to take note of it. 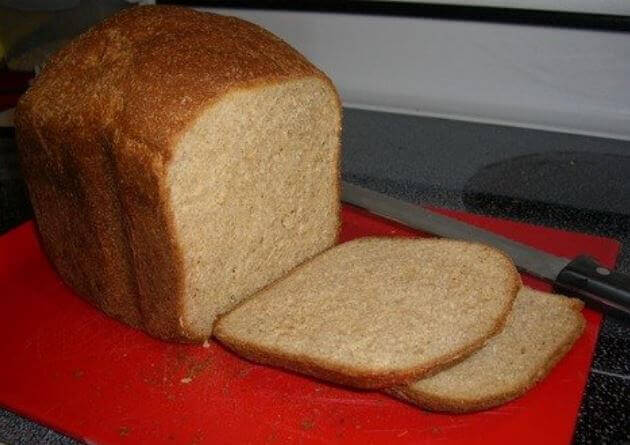 While there were a minimum of 1-star reviews, the majority of them were related to dissatisfaction with Panasonic’s ability to provide replacement parts or fulfill the warranty in the case of a defective product. There were also complaints about the website as more of an advertising/marketing source rather than a resource for trouble-shooting or parts.

“Very poor support from the company with regards to service, returns, repairs and parts.”

“I am getting quite a run-around trying to get some action on the warranty.”

“I have already tried to find the replacement part and it is not available.”

Yes. In the operating instructions and recipe book that comes with the machine there are no less than seven recipes for whole wheat bread.

“Has anyone used this breadmaker for at least 3+ years so far, baking at least two bread loaves per week without any issues?”

I have used this machine for about 2 1/2 years averaging at least one loaf per week with no issues.

“Is it Teflon inside?”

“Panasonic bread maker – burns bread: Anyone else have this problem?”

Did you try ‘sandwich’ option? This works great for whiter bread. I add extra milk and sugar for extra soft sweet white bread. Another way is I bake only 20 mins as basic, and stop and keep it inside 10? mins . Maybe you need to wait until cool down(makes inside softer) removing from machine. Yes, I had same crust problem… This basic baking time is too long. I also avoid the function for keeping warm after baking.

“How many minutes before the yeast drops in after you start the machine?”

“Does anyone know the replacement paddle part number and stock list?”

“Several people have said this machine makes good whole wheat bread. I’d like to know if that’s the case when only whole wheat flour is used, no white flour.”

“Most of the recipes in the book call for 4 7/16 cups of flour. I have never seen flour measured like this. Is there a better way to measure the flour?”

What I do is – I measure 4-1/2 cups of flour into the bucket, then I remove a level tablespoon of flour out of the bucket. I do this before I plunk in all the other ingredients. This will give you exactly 4-7/16 cups of flour…16 tablespoons equals 1 cup 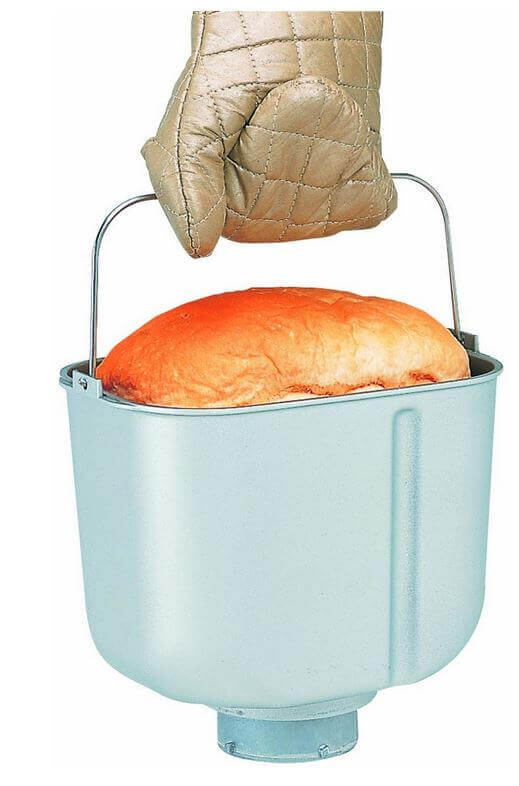 The Panasonic SD-YD250 is a good all purpose machine at a reasonable price that can handle a variety of bread types. It’s well suited for a person who wants to make some general, all-purpose breads or feels the need for a yeast dispenser as an added convenience. It is reported to be a bit noisy and the vibration could be a problem if it causes it to fall off of the counter top.

It measures 14 x 13.5 x 9 inches and weighs 15.4 pounds. It comes with an instruction book with 40 recipes, a measuring cup and measuring spoon. It is available in white only and comes with a one-year warranty.