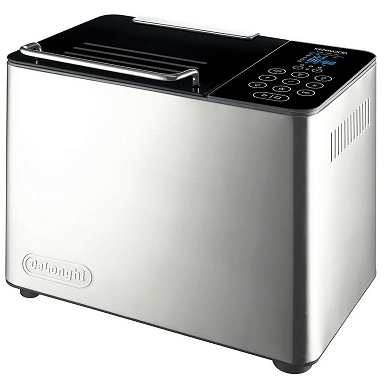 The DeLonghi Bread Maker offers a robust set of features including a convection option that circulates the air to create a crispy crust and reduces the moisture that sometimes weighs-down a loaf. DeLonghi calls it “fan-assisted” which is essentially what a convection oven does to circulate air.

It also has a hopper that allows you to add fruit or nuts at the appropriate time and 15 custom settings.It also has a very large viewing window in the top and an internal light to allow you to check progress during the baking process. Many owners like these features but just as many feel the machine is complex to use.Most of these comments are related to a recipe book measured in weights as opposed to ounces and cups, and unclear directions about how to program the 15 settings.

As in the past, the machine is very good but the instruction book was not well received by many owners.Once again, I’m a bit surprised that a very well engineered product seems problematic because of the instruction book.Maybe bread-machine manufacturers need to spend a bit more time getting the book right so people have better success with the machine.

“It’s made perfect bread every time I’ve used it. The recipes accompanying the machine were confusing but once I used my familiar bread machine recipes the results were great.”

A unique feature on the DeLonghi bread machine is an internal fan that works on the principle or a convection oven.Many people like this feature and have reported good results.

The Automatic Fruit and Nut Hopper

The DeLonghi Bread-Maker has a fruit and nut hopper that works very effectively.Like most fruit and nut hoppers, adding a bit of flour to the raisins or dried fruit helps to release the fruit at the right time.There were no customer complaints about this feature which was a bit surprising given the fact that many bread-machines with this feature seem to have a problem with the fruit sticking in the hopper and never making it into the mix.According to one owner:

“The fruit and nut dispenser is great too, things are very easy to clean and there aren’t any dry corners like other machines. This machine is a little bigger than I expected it to be, so take that into consideration if you won’t have a large spot to store it.”

This is another unique feature of the DeLonghi Bread Maker.Many bread machines have a viewing window but many of us know that we need either a direct overhead light or a small flashlight to actually see inside.The DeLonghi Bread Maker has a built-in light that allows you to see the kneading, rising and baking process.It’s actually one of my favorite features given that most bread machines do a fairly good job across all features, and the built-in light is a genuinely unique feature.

Like many other bread-machines, the DeLonghi has numerous settings across a range of breads and other features from jams to jellies.A curious comment from owners is related to the poor communication related to the 15 settings.This points again to a poorly written instruction book and a machine interface that seems to lack the fundamental communication for each setting.Many owners were very clear about this issue.

“It has 15 programs and they aren’t listed on the machine. There is an awkward little book thing that’s attached to the handle by a chain, NOT very functional. It would make much more sense to have the program settings listed on the front of the machine.” 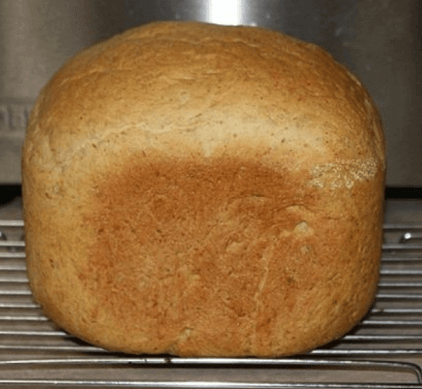 According the specifications on amazon.com the DeLonghi bread machine makes either a 1, 1.5 or 3 pound loaf.I found those specs indicating a 3 pound loaf a bit strange given that most bread machines and recipes are designed for loaves in the 1, 1.5 and 2 pound size.After a bit of investigation it appears that it is in fact a 2 pound loaf maximum.It makes a “tall” or vertical loaf size as opposed to the horizontal loaf found in some bread machines.The pan is identified as non-stick but there is no indication in evidence as to whether or not it is a Teflon coating.Typically the coatings are Teflon and if a manufacturer offers a different kind of non-stick coating they usually do a better job of touting that feature.

Complaints about the instruction book range from “little information” to “it’s more of a booklet than a book.”There are also concerns about some lack of information and the fact that all ingredients are measured by weight rather than fractions of a spoon or cup.A baker’s scale is not terribly expensive but it’s one more thing to clean and store.It’s also somewhat tedious when you’re measuring very small amounts such as salt, yeast or sugar.

“The recipe book that comes with it gives the measurements for the flour in weight. Not everyone has a kitchen scale so it would be nice if it had both weight and cup measurement.”

The DeLonghi bread machine has a very thin, collapsible paddle.This is supposed to reduce the size of the hole left in the bottom of a loaf after baking.According to some owners, “It left a nice, thin hole.”But others have had some problems with the paddle not unfolding properly or leaving a larger hole in the bread.Generally, the paddle seems to do an excellent job of kneading the dough and capturing all of the flour in the pan, even in the corners.

“This machine really does get the corners. I was pleasantly surprised to go check on it and there wasn’t a speck of flour in the corners of the pan”

Overall, the DeLonghi DBM450 Bread Maker appears to be a reliably built, fully-featured bread machine with many of the more complex features typically found in some of the more expensive, higher-end machines.It appears that it requires some homework on the part of the owners to get familiar with the recipes, weights and measures, and the cycles.