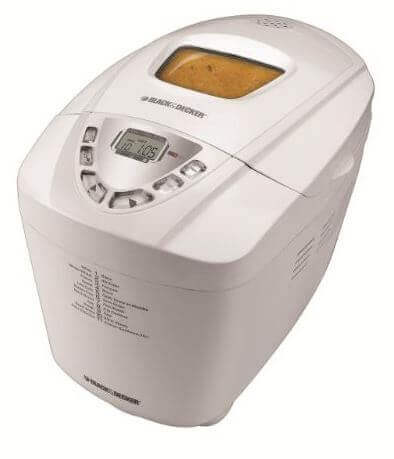 It bakes a whopping 3 pound loaf and receives high marks from owners, sometimes.

Here’s something you don’t see everyday: a 3-pound loaf. We have not reviewed a bread machine with this capacity before and it seems to be unique in the category. Black & Decker reports that it will bake a 1.5, 2-pound loaf and the massive 3-pounder. It’s massive when you consider the fact that most bread loaves bought in a grocery store are one to two pounds in size.

The Black & Decker 86000C has a horizontal loaf configuration which creates a traditional loaf shape similar to store-bought bread. Many people prefer this to the vertical loaves that most bread machines bake. It’s been noted by some owners that the 3-pound loaf is very tall and some people cut it in half lengthwise and then slice the halves to create bread slices about the same size of a sandwich slice.

Like all other bread machines with a horizontal bread pan, the Black & Decker 86000C has two kneading paddles. These are two, rigid or fixed paddles unlike some of the problematic folding paddles found on other machines. The two paddle system is important with a horizontal bread pan to evenly mix and knead the dough. One owner offered some advice on adjusting the paddles.

“Does it matter what position the paddles are in when you attach them to the spindles inside the mixing/baking tray?”

The paddles can only be put on the shafts in one position because the shafts are shaped to fit the inside shape of the paddles. You can position them any way you wish. I usually put them so they are at opposite positions corner to corner. Using a map reference, one is pointed NNE and the other SSW. That is the best.

There were no complaints about the kneading paddles other than the usual lament about the holes they leave in the bottom of the loaf. The baking pan was described as “non-stick” although there was no specific information given with regards to what kind of non-stick coating was applied. Generally, bread pans for bread machines have a Teflon or a Teflon derivative as a coating.

The Black & Decker B6000C has 11 settings including gluten free. It also has a delayed setting that can allow you to preset a cycle up to 13 hours in advance. We put together an article on our site here about how to best use these delayed cycles. You don’t want to use dairy products like milk, buttermilk, eggs or butter on a long, delayed setting. The machine also has two crust settings including regular and dark. There were no complaints about the crust settings.

Another Problem with an Instruction Book

We’ve seen an alarming pattern of complaints about instruction books across many of the bread machines we’ve reviewed. It appears the Black & Decker B6000C has some similar issues. Here’s what some owners reported:

“Whoever wrote and edited the instruction manual should seek other employment–an entire function on the machine was excluded (yet referenced throughout), and other information it just plain got wrong, but it did offer a few helpful hints so it wasn’t an entire waste of paper.”

“The B&D manual only has ONE sample recipe for each setting, and the ingredients are automatically scaled for the largest 3-pound loaf size.”

The good news is that there are some easy workarounds for any instruction book. We have developed a number of recipes you can find here on breadmakermachines.com, and there are many recipes on the Internet and in bread machine cookbooks. Unfortunately, few of them are developed for a 3-pound loaf so you’ll have to study the proportions in the B&D instruction book and scale them up for some other recipes.

Like many bread machines, the Black & Decker B6000C has an LCD panel. Problems with this control panel formed the other pattern of complaints for this machine.

“The display is difficult to see, even in good light, because it isn’t backlit.”

“The display can be hard to read.”

There are work-arounds for display problems that involve the use of a small flashlight or a light on some smartphones. If a backlit display is important to you, you can find machines that offer that feature but many cost twice as much as the average $90 price for the Black & Decker B6000C. That’s a lot to pay for a backlit LCD panel and a flashlight would be a more economical option.

80% of owners on average rated the Black & Decker 86000C in a range of 4 to 5 stars. Those are high marks and could have been higher if not for the pattern of complaints defined by this owner:

“My 4 star rating would have been 5 star if better instruction book and backlit control panel.”

This comment represents a consistent pattern of owners who gave the machine 4 stars instead of 5. If Black & Decker didn’t have these issues it might have been one of the highest rated machines we’ve reviewed for the price.

Viewing Window in the Lid

Like most bread machines the Black and Decker 86000C has a viewing window in the lid. There were also a few comments about the lid not closing properly.

“The cover is floppy, needing to be seated each time you close it.”

This was not representative of a pattern of complaints but the observation showed up a few times and could represent a real problem If you notice this on any bread machine. A loose fitting lid will compromise the rising and baking cycles and will result in a sunken loaf. Make sure the lid is seated and firmly closed and never open during the rising and baking cycle. If you do need to open the lid on any bread machine during the later cycles do it quickly and infrequently. 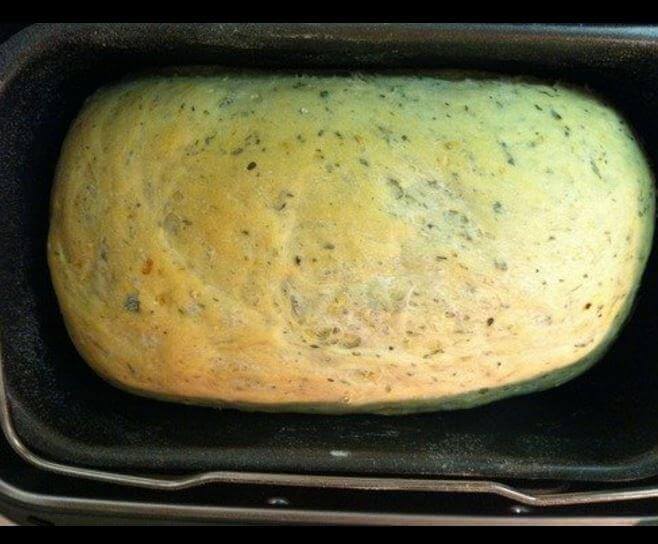 For a machine that retails in a lower price range there were no apparent complaints related to results, performance and durability. Some owners remarked that the machine was surprisingly light and somewhat tall which made is difficult to open under low hanging cabinets, but no apparent complaints related to overall product quality and machine performance.

“This versatility is a big plus for me as I often prepare larger batches of dough.”

Worth your consideration if price is important.
The low price; range of features and relatively low-impact complaints related to the instruction book and the LCD panel rates this machine as a good possibility for many bread bakers. The 3-pound loaf size is unique and if you want to bake large loaves it will certainly deliver. 3-pound recipes may be a little hard to find, but with a bit of homework you can figure it out.